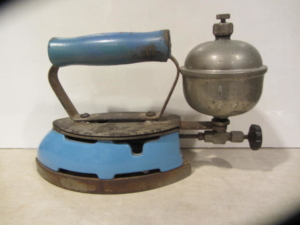 The iron was made between 1929 and 1948 in blue, turquoise, green. tan and black enamel.  Coleman made over 30 different models of irons.  A pump was used to build up pressure in the tank. A match was lit underneath to make a flame inside.  Fuel irons were an improvement over earlier “sad irons” that had to be heated on a stove or charcoal irons.  Fuel irons were lighter in weight and their temperature was more even, but they were potentially dangerous.  Gasoline, alcohol, kerosene and other fuels could cause a fire or explode.