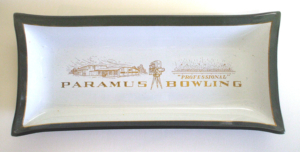 At one time celebrities such as Joe Lewis and Jayne Mansfield came to watch shows being televised from these bowling lanes.  Shows like “Make That Spare” and “Championship Bowling” packed the building on Monday nights.  There was seating for 500 spectators who watched “wrong-foot Lou Campi and also Graz Castellano, the first person to bowl a perfect 300 game on television.  The lanes eventually closed and became Sports World, an entertainment complex that then gave way to a new building with a retail store.